I have no idea WHERE the time has gone!

I sat and had a good think about how to mark the occasion, and rejected the option of a "reflective musing" post - I reckon I've done enough 'blether' for a while with the last couple of offerings, and decided it should be a game report.
But what to play?    I've uploaded a D&D episode here:  On the Trail of The Stone  this week, and there's another ECW scrap to be posted here:  "For Parliament or For King"   in the next day or so.

What seemed most appropriate would be a return to the zombie apocalypse given the current pandemic situation and it was the first campaign I started!
Yes, just five posts in and the "introductions" out of the way, the ATZ: Final Fade Out campaign began way back here:  ATZ: "Day minus One" and we followed Brad and his group as they struggled for survival. As is the way of things with us gamers, this particular story has had to give way to other tales which needed to be told, as the wargame table witnessed conflicts involving 'other' genres of topical interest.
The last time I checked in on the survivors was with a short episode which formed one part of a larger post,  but we learned that they'd found themselves in hostile territory, and after a tip off from one of the opposing gang members Brad's group are moving on. 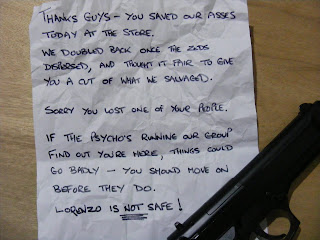 A quick consultation with "Mythic" (the GM emulator), and it turns out that since when they left the group didn't destroy the warehouse they'd temporarily stayed in, or set fire to the petrol station across the road (the kind of mean trick the hostile gang bosses would have done!), the guy who left the note decided that he and his partner were going to cut and run and try to join this group of 'lawful' survivors.

So it was, that on the outskirts of Lorenzo, Bobby Johnson and Madelyn Hopper found the road ahead blocked. They had to clear the road and fast, not just to keep up with the friendly group, but they were worried that they probably had gang members on their tail.
(They did, and they would arrive at the table edge on a successful die roll!) 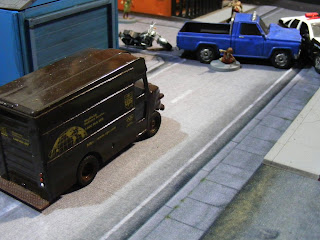 With Maddie watching the rear, Bobby stepped up and dispatched the crawler by the wrecked pickup, 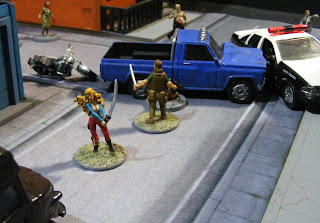 before calling Maddie over to help deal with the zeds approaching the junction.
(The PEF resolved as just a bad case of nerves) 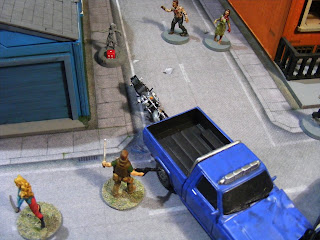 They needed to get the bike out of the way, but for the moment it provided a handy barricade, 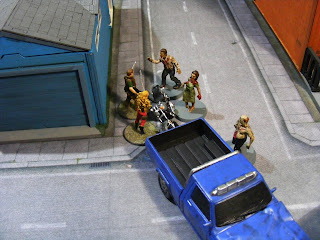 and allowed them to pick off the walkers without having to fire a shot. 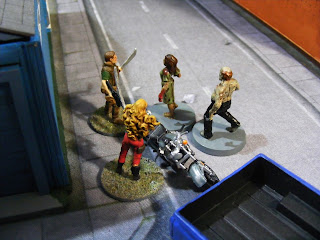 With the nearest of the undead cleared, Bobby had just flipped the bike clear when something burst through the doors of the diner - 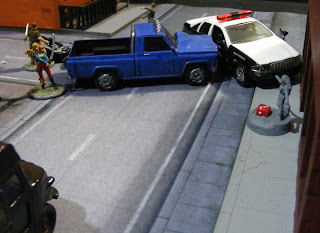 another pair of zombies! 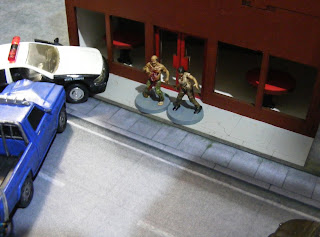 The zeds lurched across the street towards Maddie, but Bobby managed to get alongside her just in time 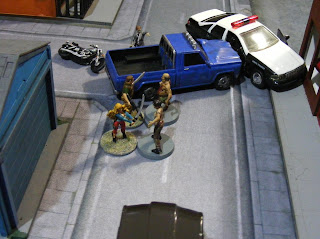 and in the pair of them quickly saw off the attack.
Bobby ordered his compaion back to the delivery truck "The place looks like it might hot up - let's get while the goin's good" 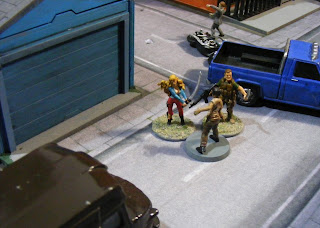 The pair climbed back into the UPS wagon and fired it back up, 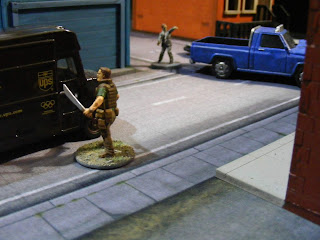 then headed North at the junction towards Cone. 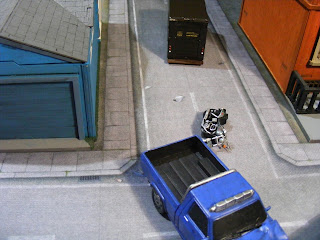 A while later the gang members turned up.
(Pathetic dice rolling - they needed a 6 on turn two, 5, 6 next turn, 4,5,6 the turn after etc, but failed to arrive until it was too late) 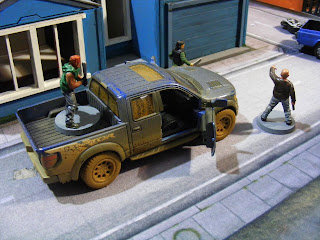 Surveying the scene it was obvious that the fugitives had passed this way, but they had no idea which road they'd taken ("Mythic" was consulted to see if the UPS van had left any telltale signs), so they had to return to Lorenz empty handed..... and their boss would NOT be pleased!

So, there we go. Just a quickie because I'm off to pour myself a cupps and cut a (big) slice of anniversary cake!
Thanks to everyone in the blogging community for all of your help, support and inspiration, without which there's every possibility I'd never have got this far with my own humble offerings.

Remember, be like Bobby & Madelyn, and even if you can't carry a machete, katana or assault rifle, stay safe out there! (and you can always leave me a quick comment if you get the chance and feel inclined - it would be most welcome) 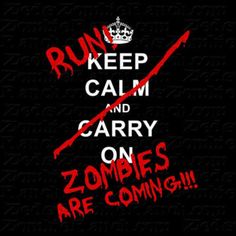 Posted by The Wargame Addict at 16:11 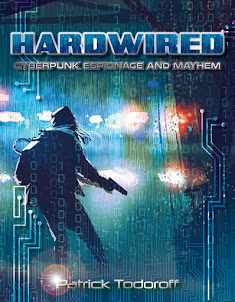