To say it's been a horrible week and a bit would perhaps be stretching things, but it's certainly been far from 'fun'. First of all I had the problem with Blogger not uploading photo's (which would hamstring my activities here), which meant spending hours of frustrating effort trying to get it sorted - I HATE having to faff about on computers when they're not doing what they're supposed to, and the whole episode resulted in my hobby mojo taking a knock.
Then, while this was going on, I'd braved the great outdoors to do some shopping for my mum, and on the way home the van developed a rather unhealthy knocking from the passenger side rear wheel. It was late afternoon, so I delayed the job until the following morning - and thus spent a huge chunk of the next day stripping and re-assembling the brake caliper which was seizing up (probably through lack of use during the lock down)........ managing to sprain my wrist in the process, but hey ho, the job was done and surely things would improve from here on?

Well, yes and no! The lovely Tarot rode to the rescue and provided the solution to the Blogger issue (Yay!), but I've still got pain and stiffness in my right wrist and thumb / forefinger guiders (Boo!).
I needed to do something, rather than lay off and allow it to stiffen up but as I say, I didn't feel like doing any 'gamey stuff', so I decided to tackle a couple of jobs on my model railway that had been on the "to do" list for about 3 years!!
The Westwood & Loscoe Light Railway had taken delivery of an old workhorse in need of some TLC (a secondhand Accucraft "Caradoc") - here's her new driver and fireman having their first look at the latest addition to the stable... 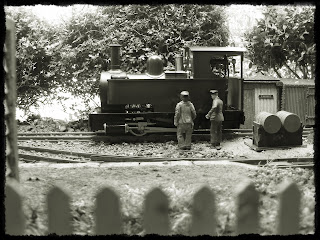 The loco is still in 'factory finish' and looks quite plain at the moment, but I do like her chunky appearance and I'm looking forward to getting her repainted into WLLR black, and adding some detail to bring out the character of a hard working narrow gauge loco (lamp irons, handrails etc).
Back to the job in-hand though, I set to and replaced the factory fitted gas burner with a much more efficient one and like-wise removed the standard gas and steam regulators with "fine adjustment" versions - replacing the unrealistic looking control "knobs" with levers while I was at it.
These improvements meant disconnecting the gas and steam pipes, so before the work could be 'signed off' I had to check for leaks and she was duly fired up and brought up to pressure.... 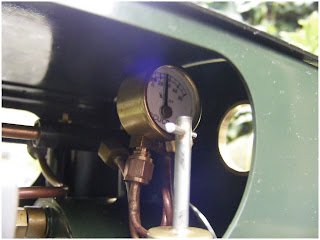 Buoyed by my success, I decided to make a start on another job on the railway which has long been awaiting the 'round tuit' stock replacement. This summer will see the "quarry section" of the line removed so that I can re-route the main running line away from the bottom corner of the garden. The quarry was only added to hide the hedgehog house from view, and since the rescue centre has sadly closed we'll no longer be releasing 'hogs, so the realignment has finally been granted approval by the higher household authorities.
Before getting down to the business of shifting rocks and lifting track I marked the occasion with a quick photo opportunity, recording the moment that Rusty and the Blue Meany (a pair of scratchbuilt battery operated diesels) were removed from Waingroves Quarry to enter service on the WLLR. 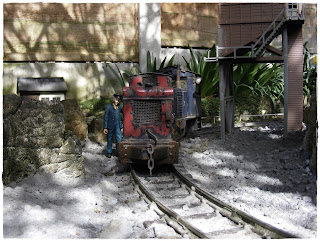 "Hang on, I thought this was a wargames blog" I hear you cry, and yes it is, but bear with me and I'll explain the relevance of the above......

The track realignment is underway, but will take some time (track laying in the garden railway scales bears more resemblance to the real thing than the indoor baseboard layouts), but having got the modelling juices flowing again I was keen to tackle another job, and appropriately a had yet another project that has been neglected for nigh on 3 years - and so my old "Mighty Fortress" from Games Workshop has finally got painted up and can at last be used on the table! 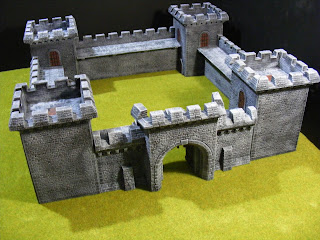 At this point, just as I was thinking that everything was back to running smoothly, we received advanced notification from HMRC that we would be able to make a claim for the self employed income support scheme this month (instead of having to wait until June as originally forecast - Yay!). BUT, anti fraud measures meant that we had to visit the GOV.UK website and create a "personal tax account" (we don't already have one since our annual returns are done through an accountant for peace of mind), because the whole claim / notification procedure will only be conducted via this secure account. Guess what........
....MORE hours wasted in front of the computer screen trying in vain to set up this account (Boo!).
In all fairness, it might well be down to sheer volume of traffic on the website, and this is a brand new scheme that HMRC have had to set up from scratch and teething troubles are to be expected, so I'm not knocking them and I'm sure they'll get it sorted in time - but did I mention that "I HATE having to faff about on computers when they're not doing what they're supposed to"?

Sorry about the "Off Topic" nature of this post, but hey, it's the blog's third anniversary in a few days time (another '3 year' tie-in!) so I'll celebrate by returning to normal service!
Until then, take care, please leave a comment if you so wish, and.......... 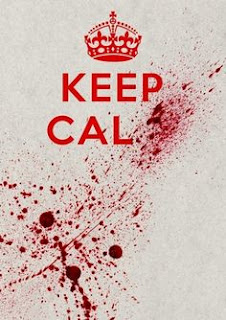 Posted by The Wargame Addict at 18:13

Email ThisBlogThis!Share to TwitterShare to FacebookShare to Pinterest
Labels: Blether 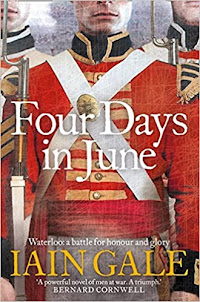