After months of political maneuvering and a stalemate in the "paper war",  the gloves are off! 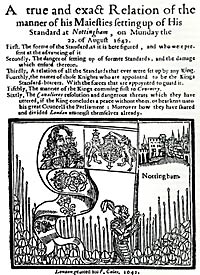 The king raised the royal standard today, 22nd August 1642, in Nottingham castle and "Summoned all well affected people north of the River Trent to muster there", what better day to get my ECW campaign started?!
With curve balls aplenty to deal with, time has been VERY limited here at TWA Towers, but I'd earmarked today for a test drive of the "Pikemen's Lament" rules.

Chaotic scenes are witnessed across the East Midlands, as parties loyal to King or Parliament begin their initial moves to secure key locations for their cause. In the (fictional) Erewash Valley, the two major towns of Kenborough (parliamentarian) and Worringham (royalist) are polarised in their allegiances, and the struggle has begun for strategic control of  the region. 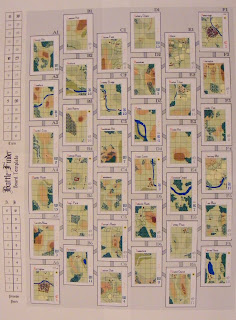 The first job was to create a pair of rookie junior officers using the 'Background' and 'Traits' tables in the rules, so allow me to present, for King Charles.........
Ensign Gerald Castledine. A weasel of a man with little honour, much to the chagrin of his rich merchant father who paid for his officer rank and financed his troop of horse.
Being of a "sly nature", he may refuse any personal challenges without occurring any usual moral checks. 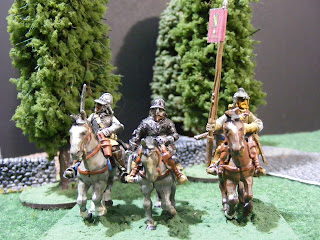 For Parliament.......
Ensign Henry Palmerston. The son of a priest and seemingly also blessed in some way, as he always seems to escape danger.
Having the 'Blessed' trait makes him invulnerable to "Lucky Blows". 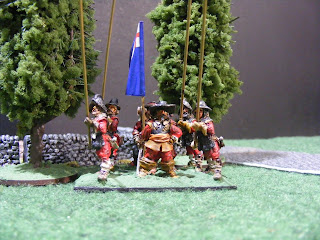 Next, I raised two "companies" to suite the scenario, which was a variation of 'Mission C: The Kings War Chest' in the rulebook -
On hearing that King Charles had declared a state of war, the local parliamentary C-in-C acted swiftly to consolidate men and munitions. The Trained Bands were called to arms, and a young officer (Ensign Palmerston) was instructed to seize the weapons, powder and shot stored at Trewes castle - by force if necessary, and transport them to Kenborough.
His company of foot were bolstered by a troop of dragoons for the mission, and a squadron of the Kenborough Horse were also placed at his disposal to act as escort once the munitions had been brought out of the castle.

Taking advantage of the confused state of affairs at the garrison, Ensign Palmerston soon had the contents of the armoury loaded into a pair of carts and away at speed with the dragoons, his pike and shot moving slower in an attempt to "screen" the rear.
Having outpaced the foot, and misunderstanding their orders to rendezvous with the Kenborough Horse at the bridge, the dragoons called a halt by the river and watered their horses while they waited for everyone else! 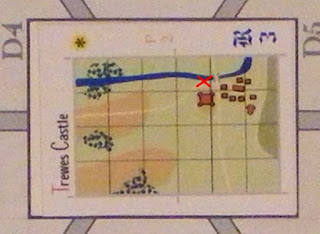 "Minimalist Wargaming" - as I said, hobby time is currently at a premium, but I was determined to get a game in - no chance of titivating the table scenically and there'll be no "cotton wool puffs of smoke" or fancy markers I'm afraid.

The dragoons watering their nags 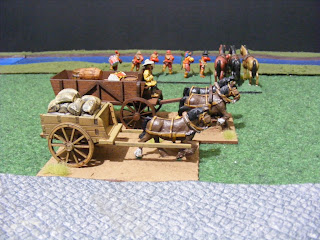 The "Defenders" were allowed 4 points worth of troops on the table and in contact with the river. The rest of the force could arrive from turn 2 with successful 'Move Orders' on the north edge of the table (the screening force) or south edge (the rendezvous party).
The "Attackers" deployed their entire force on the west edge of the table (having sallied out from the castle), and would move first each turn (no rolling for initiative) 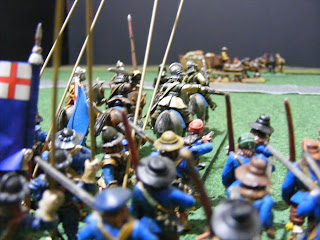 This could be very one sided! 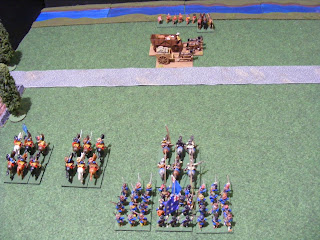 Especially since the dragoons failed to activate!! 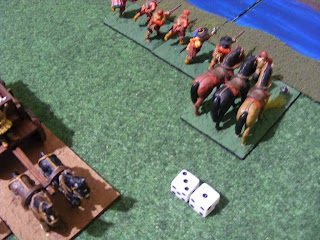 Gerald Castledine is a young man with something to prove - and since he commands a unit of cavaliers, what better way to go about it than by charging pell-mell at the enemy (especially those rag tag dragoons who have finally responded to the royalist advance!) 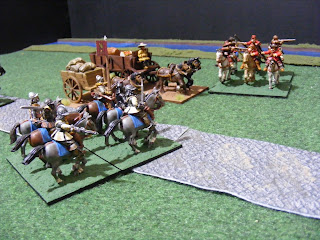 The dashing cavaliers suffer the first casualty from the skirmishing dragoons (was this unlucky chap the first fatality of the war??) 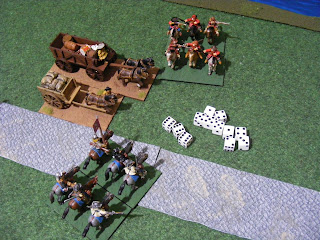 The end of turn 2, with parliamentarian reinforcements arriving after the royalist advance.
Both troops of Kenborough Horse and the pikemen led by Ensign Palmerston have arrived 'on time' but the musketeers failed to activate. 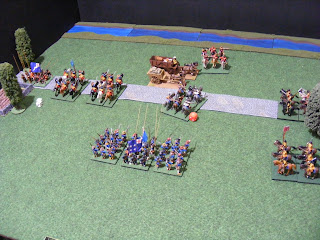 Castledine's launch the first charge of the battle, but the dragoons successfully evade...... 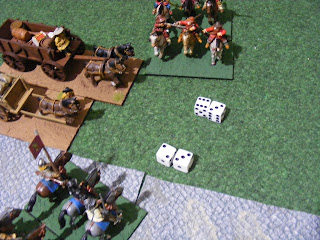 .....only to be charged again by another troop of royalist horse who'd advanced around the flank.
Castledine's troop was itself then charged and seen off by a unit of the Kenborough horse!
It looks like poor Gerald is heading for an early bath (in the river!) 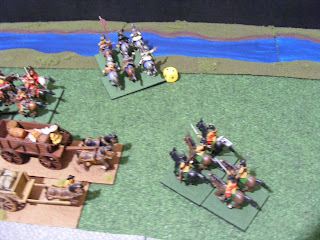 Over on the left flank, the inexperienced royalist cavalry attempted to ride down the foot soldiers who'd just strolled down the road and started waving their pointy sticks at them and calling them unsavoury names. 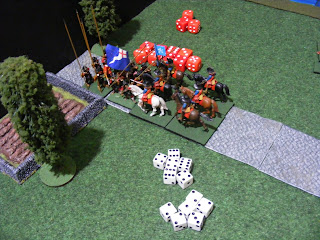 The outcome was predictable! 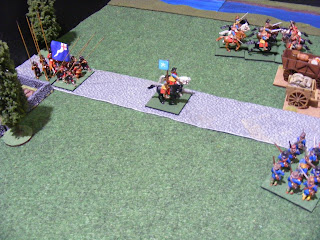 Not wanting to go anywhere near formed pikemen, the better disciplined parliamentarian horsemen discharged their firearms at the opposing musketeers, with what seemed little effect.... 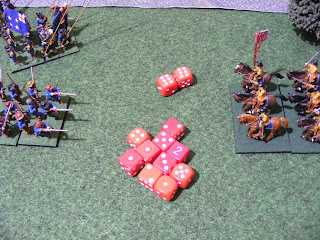 ... it obviously rattled them though, because they failed their "Shoot" activation order when they attempted to respond at the very start of the next turn....... 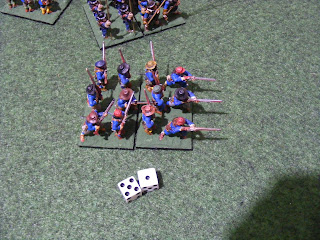 ......and since ANY failed activation passes the initiative to the opposite side, and their illustrious leader and two troops of horse were running away, and the parliamentarian musketeers had turned up, the old corporal in charge of the Trewes castle garrison infantry decided to march his men back to the security of said castle and leave the wagons to the roundheads! What was in 'em anyway?? 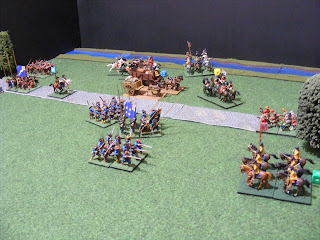 Trouble ahead for young Gerald Castledine when he dries out and arrives back at Trews castle, and accolades await Henry Palmerston if he can get back to Kenborough with the wagons.
A thoroughly enjoyable test drive of the rules, and I now "get" how dragoons 'work' which seemed odd when I initially read the rulebook.
Looking at the game and the rules as I typed this AAR, I spotted a mistake I'd made regarding when and how troops react to losing in melee - well, the war has only just started and generally all rank and file participants (including your humble scribe) are new to this malarky!

Many thanks for visiting, reading, and putting up with the poor photo's! As ever your comments and questions are most welcome!

Unfortunately no game report this post, my gaming space is being used to "rough out" ideas for creating a modular urban layout. 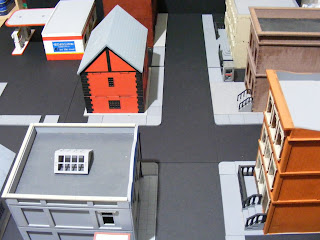 I've cut a dozen 1ft squares from 5mm foamcore, and I'm using my eclectic mix of mdf buildings, along with the TT Combat mdf paving.
Much head-scratching going on at the moment, as I try to realise just what I've got in my minds eye, and I'll keep you informed on my successes and failures via progress reports!

Using my 'playing area' for large modelling projects has been OK up to now, but this week it's really been a pain in the posterior by slamming the brakes on the run of campaign games. It's a poor compromise and I really must sort out an alternative solution!!

The paint table has seen a flurry of activity this week. after I had a stroke of luck on ebay last week. Someone was selling their TWD:All Out War collection in two listings - the core set plus extras in one, and Prelude to Woodbury plus extras in the other. I thought the starting price was very reasonable so placed a bid on each........ to my amazement no-one else bid on them!
The zombies and four of the survivors were painted to a nice standard, and all they needed was their bases painting grey (the previous owner had chosen green) and the minis treating to a coat of Army Painter 'Strong Tone' wash to tie them in with my own zeds.

So, I've added to the horde via the All Out War core set, 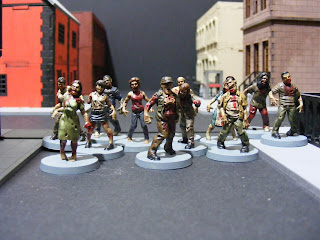 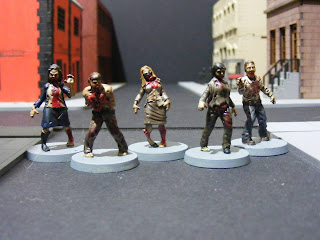 and the walker from the "Carol" booster. 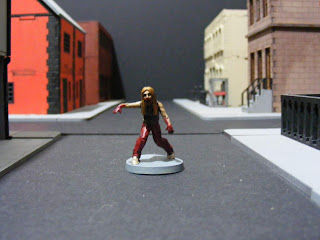 There's another walker in the Andrea booster, but I didn't spot him in his black primer when I grabbed the rest and he's currently under the brush!
The four painted survivors again just needed grey bases, but a 'Soft Tone' wash to match my other "not yet infected" minis. 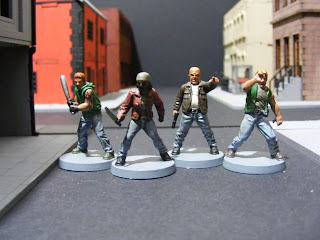 Apologies for the humble offering this week, but I figured that a paltry post is better than no post at all, and I thank you for your patience! 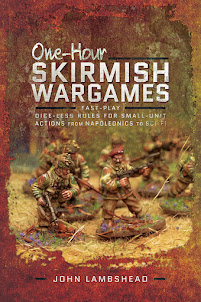